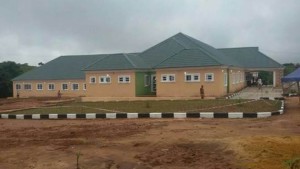 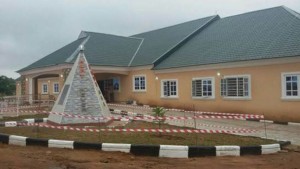 July 26, 2016 will go down in history as the day when Bhagawan’s healthcare mission commenced with the inauguration of the new hospital in Enugu, Nigeria. The Joy Ashram was abuzz with activity with everyone from grownups to children, putting the final touches. On the red lettered day of Swami’s mission in Africa, the magnificent edifice of the Hospital beamed in pride of being the largest medical centre sprawling on 35,000 square feet of construction, ready to serve all, absolutely free!

The miracle story behind is far more intriguing, a perfect master plan! Early last year, Brother Jude Nam had enquired with Father Charles about the possibility of a heart operation for his 10 year-old-boy at any hospital, at an affordable cost. Father Charles prayed to Swami who guided him to Swami’s hospital at Naya Raipur, Sri Sathya Sai Sanjeevani Hospital, which performs free cardiac surgeries for children. It is a National Center for Child Heart Care, the largest and the only hospital dedicated to providing totally free-of-cost Pediatric Cardiac Care. In a short span of four years since inception in November 2012, over 10,000 children with heart disease have been treated, and over 2300 surgeries have been performed, of which 1000 were performed in the year 2015.

With Swami’s guidance for Brother Jude Nam’s child, the whole system sprang in to action immediately. Documents were prepared, visas were procured, tickets were arranged and Brother Jude Nam travelled with his child to Sri Sathya Sai Sanjeevani Hospital in Naya Raipur. While the child was being operated, the anxious father Jude, ambled into the prayer room and saw a large portrait of Swami. With tears of gratitude rolling down his cheeks He prayed to Swami, “My child has been brought here through the help of many and is being cured, but many in Africa cannot afford to come all the way here even if it’s a free hospital. Please do something for them in Africa.” Though the prayer was made months ago to a photo of Swami thousands of miles away in India, Swami in His discourse during His last visit to Enugu, mentioned about it and promised the people of Africa a free hospital! Jude Nam who was presenting a programme of gospel songs on that occasion was pleasantly surprised by this mention of Swami, and came over to the mic to reveal, “When I prayed in the room at Raipur Hospital, I did not know someone was listening.” Swami the silent listener of all conversations had heard the selfless prayer, and responded to it well in time!

A year later the new hospital “Aruike Hospital”, (The Hospital of Good Health) named by Swami Himself, has been dedicated by Swami to the people of Enugu, and Lord’s entourage flew from Lagos to Enugu to be a part of this historic moment of Sai’s glorious mission of free healthcare for the poor!

The children were beautifully dressed, and played little hosts to all the Government officials, guests,residents of the Ebe village and other invitees to the event, adding much pageantry to the day.

The event started a little after 2:30 pm, as soon as the Commissioner of Health and representative of the Governor of Enugu, along with the former Commissioner of Health, arrived at the hospital grounds where canopies were erected overnight. The venue was brimming with people from the neighbouring villages who had turned up in their best finery to be a part of this festive, and historic event. On the dias were seated Government officials, Sri Narasimha Murthy, Sri C Sreenivas, Mr Issac Tigrett and members of the Sri Sathya Sai Global Aid Foundation.

Father Charles Orgada delivered a powerful Welcome Address, giving the people the story of his introduction to Bhagawan Sri Sathya Sai Baba, where he saw Jesus’s words in action through His healthcare, educare and socio care initiatives.

“As the host community to this great humanitarian health facility, we pledge our continued support, project security, and partnership towards its progress in the service of God and humanity.” The community also humbly placed a request, to include the Abhor-Enugu-Enugu Old Link Road for reconstruction which will give easy access.”

The Commissioner of Health expressed his gratitude and offered full support for the smooth functioning and growth of the hospital. He said, “The core vision of this hospital is in line with our vision, efficient healthcare delivery system. I have seen the magnanimity of this hospital, and I have seen the capacity as well. Based on what I have seen, this is in line with the western standard, and I am thankful. Like it is said in Christianity, ‘All men are created equal.’ On behalf of the State Government of Enugu, we will continue to provide an enabling environment. We will partner and support your vision.”

The next speaker was Sri C Sreenivas who addressed the people of Ebe and Nigeria stressing on the need for integrity in healthcare in today’s world, and how Bhagawan’s healthcare mission epitomised it. His moving and inspiring talk left everyone on a high and positive note. He introduced the first batch of staff, a young doctor and nurses to the cheerful applause of all gathered. He also assured the people that the Sai Sanjeevani team from Raipur will be engaged in the Enugu Hospital, and endeavour to understand the needs of the people, lending their complete support. He said the task ahead was formidable, but it promised wonderful times.

In His discourse, Bhagawan spoke of how the principle of love is universal. “Love without service is no love, and service without love is no service which is evident in all of nature – river gives water to all, the wind blows for all without differentiating between people, race, color etc.” Swami said man too should live by this principle. Giving healthcare free-of-cost without any discrimination, Swami assured Father Charles and the people that the hospital will grow in time, and He would take of everything.

At the end of Bhagawan’s loving words, the cultural part of the afternoon commenced in a burst of colour in the form of traditional dances. A medley of dances by the children of Joy Ashram and the local villagers were presented with great vigour and enthusiasm, and were characteristic of the traditional folk dance form. The colourful and bright costumes added to the vibrancy of the day, bringing the day and event to a close. It was indeed a nostalgic moment for each person present to witness the grand inauguration of the first ever completely free hospital outside India, and it could not have been a better place than the most needed Africa! 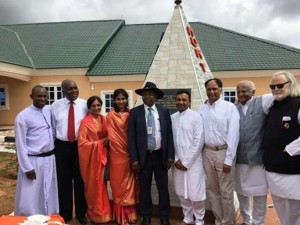 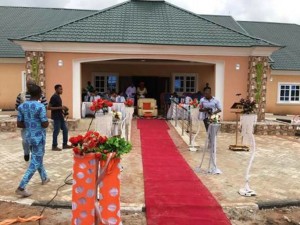 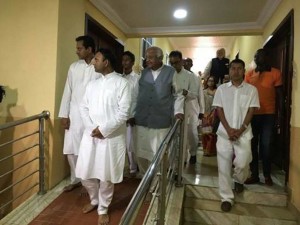